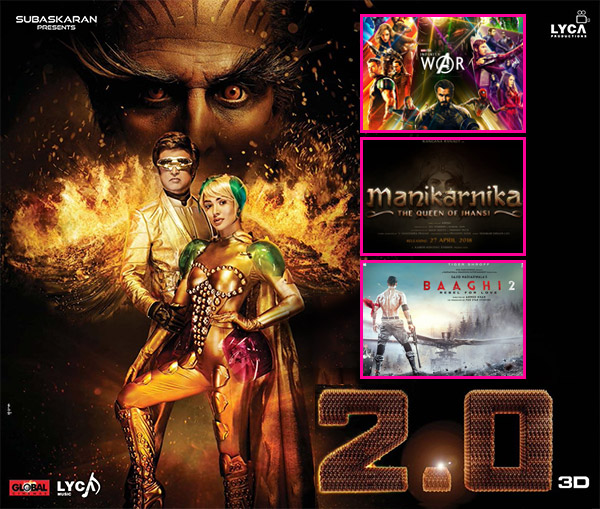 2.0 is the most expensive Indian film over the budget of Rs 400 crore

Yesterday, the makers of Rajinikanth – Akshay Kumar starrer 2.0 announced the release date of the film and raised our curiosity to another epic level. Touted to be India’s costliest film over the budget of Rs 400 crore, the makers locked the release date of the film to April 27, 2018. In the press statement, they said, “Lyca Productions-Superstar Rajinikanth – Akshay Kumar – Shankar magnum opus SciFi action thriller 2.0 to be screened worldwide in April 2018. Nation’s costliest 3D’ film starring Superstar Rajinikanth, Akshay Kumar, Amy Jackson, directed by Shankar, music by A R Rahman.The high-tech post-production words are fully geared and the team is all set to the release schedule.”

While we were expecting the film to create history as the release date was similar to India’s biggest blockbuster Baahubali 2, it seems 2.0 will face unavoidable obstructions at the box office. Not one, but this mega-budget movie is clashing with three films – (Baaghi 2, Manikarnika and Avengers: Infinity War) at the box office. While Baaghi 2 will be effective in the single screens and mass centers, Manikarnika: The Queen of Jhansi and Avengers: Infinity War is expected to get a good response in the multiplexes of the metro cities. In fact, being a 3D film, Avengers will give tough competition to 2.0 in the theaters with 3D screens

Honestly, we don’t want all these films to clash at the box office, as it’ll be a big loss to each film and their producers. Especially to Avengers: Infinity War and 2.0 as the box office is riding high on the shoulders of these two films. Do you think the makers will have a meeting and come out with the solution of this unavoidable clash? Share your thoughts in the comment section below.