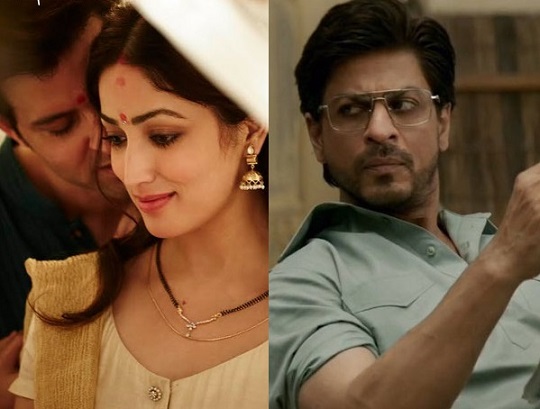 Here are seven similarities I found in both Kaabil and Raees, other than its controversial common release date. Needless to say, SPOILER ALERT!

The battle has just begun, and things are not looking too rosy for the camps of Raees and Kaabil. While Kaabil has won most of the critics’ love, Raees has the upper hand when it comes to box office collections, at least in the beginning. Now the makers of Kaabil are accusing the makers of Raees of dominating its hold over most of the screens. While that’s something the two camps should work out in the days ahead, (and not make things ugly like what happened with Jab Tak Hai Jaan and Son of Sardaar), I saw both the movies and realised that, even when the teams are trying to get an upperhand with each other over box office dominance, their products have some very glaring similarities.

Here are seven similarities I found in both Kaabil and Raees, other than its controversial common release date. Needless to say, SPOILER ALERT!

Both Shah Rukh Khan and Hrithik Roshan are working for the first time with Mahirah Khan and Yami Gautam respectively. While Hrithik – Yami pairing looks cute and lovely, SRK – Mahirah’s chemistry looks half-baked, because the movie treats their track like an afterthought.

Raees has the unique flavour of having Shah Rukh Khan’s massy appeal blend with Raees Dholakia’s artistic sensibilities. Sanjay Gupta may be a veteran in Bollywood, but he is working for the first time with Hrithik Roshan, having mostly collaborated with Sanjay Dutt.

The very talented Narendra Jha is another common factor. Known for playing Shahid Kapoor’s father in Haider, Jha is seen playing a corrupt cop in Kaabil, who is desperate to find out that Hrithik’s character was behind the killings of the baddies. In Raees, he plays a Muslim don who is responsible for the rise and later downfall of Raees.

You might have seen the Kaabil trailer where Hrithik imitates Amitabh Bachchan’s voice to fool his wife. The Big B influence is also evident in Raees, right from the posters to a scene from Deewar being played during the movie.

One of the leads die

Okay, this is a proper spoiler, so please be careful if you haven’t watched the movie. In Kaabil, Yami’s character commits suicide after she was raped twice by the villains. In Raees, though Mahirah Khan survives the movie, the same cannot be said about Shah Rukh Khan, who gets killed by Nawazuddin Siddiqui in a fake encounter.

We may keep on arguing whether both Lailaa O Lailaa and Haseeno Ka Deewana are actually required in Raees and Kaabil respectively, but they are popular nevertheless. Both the item songs are recreation of old popular songs, and both are set somewhere around the villain’s hangout.

The nostalgic setting with a dark tone

Raees and Kaabil are by no means popcorn flick. They are dark movies with Raees having a bleaker ending, while Kaabil at least ends with good winning over bad. Also both movies, intentionally or unintentionally, play homage to Bollywood movies of the ’80s and ’90s.