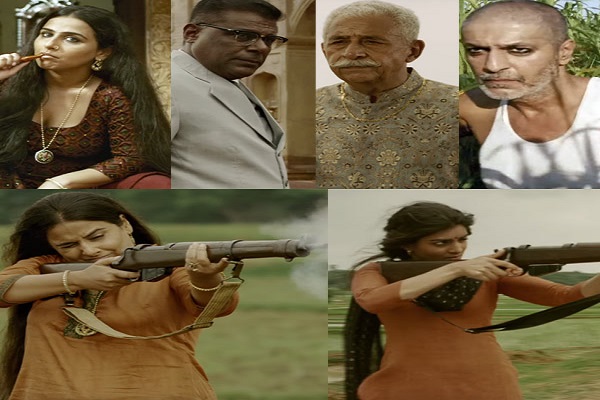 The first thing that attracted me the most to Begum Jaan is the fine acting talent assembled for the movie.

Vidya Balan is a terrific actress, a National award winner, who is going through a lean phase when it comes to her movie career after her wedding. Her last few films have tanked including her 2016 release Te3n. However, all it takes is just one movie that would bring her back in the top of the game, and that movie could be her upcoming period drama, Begum Jaan. Directed by Srijit Mukherji, it is a remake of his own acclaimed Bengali movie, Rajkahini. The trailer is out now, and it looks one hell lot of a promising deal.

Now I haven’t seen the Bengali movie (and I plan to rectify that in the near future), but from what I heard the Hindi version will be different from the Bengali flick. The movie will be set in Punjab instead, and there will be less nudity compared to the original. The trailer begins with Amitabh Bachchan giving a voiceover (An ISI mark for quality stuff, if there is anything like that for Bollywood) who explains that the movie is set during the partition era when India and Pakistan are amidst drawing their borders. Unfortunately for a brothel that is situated in rural Punjab, the border goes right through it. Owned by a bold Begum Jaan (Vidya Balan), the inhabitants are warned by the administrators to vacate the premises, but the lady refuses to lead to some tragic and violent consequences.

The first thing that attracted me the most to Begum Jaan is the fine acting talent assembled for the movie. Of course, there is Vidya Balan, a super talent in herself. But then there is Rajit Kapoor, Ashish Vidyarthi, Vivek Mushran, Gauahar Khan, Pallavi Sharda, and of course, the ever brilliant Naseeruddin Shah. But the one man who stood out in the trailer, with his look and body language is Chunky Pandey. The usually affable Pandey goes against type to playing a menacing barbarian who uses the partition violence to his benefit and is assigned by the administrators to get rid of Begum Jaan and her cohorts. But Begun Jaan is not the one to bow down to violence, and she decides to train her staff to take on the villains. Cue, a lot of bloodshed and a hint at a not so happy ending. And perhaps for the first time in her career, Vidya Balan has used the ‘MC’ swear word…