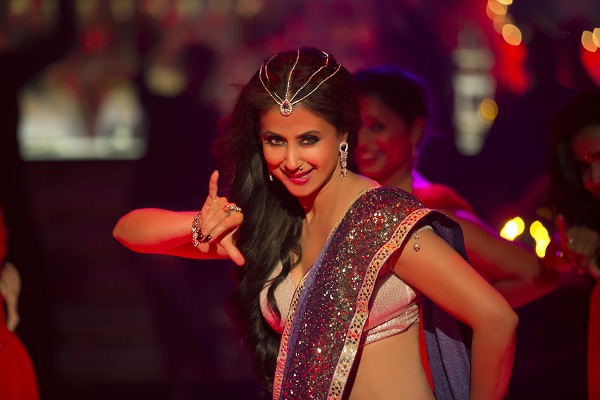 When you think of Urmila Matondkar,you instantly remember her sensuality and the magic that she spelled in all her iconic numbers like Tanha Tanha in Rangeela to Aa Hi Jaaye in Lajja. She had her own titilating ways to make our hearts flutter and trust us when we say, she was every man’s fantasy. The 90’s era was blessed to have an actress like Urmila. So the day we got to know she’s all set to make her comeback after 10 years with a song in Irrfan Khan’s Blackmail, we obviously couldn’t contain our excitement. How desperately have we been waiting to see her return on the silver screen! But much to our dismay, her comeback is very disappointing. No seriously; few seconds into the song and you will know what we are trying to say.

Although we are happy with the fact that we are at least getting to see Urmila back in the movies, but what’s with the choreography? And the music? And the lyrics? Urmila’s expression is the only saving grace of the song. Like you can see her struggling to shine in this damp-squib of a song and the makers are totally responsible for doing this to a legend like Urmila. Here, watch the video below and tell me if you don’t agree with us:

Talking about the song, director Abhinay Deo said, “Initially, there was no song in the film. But when we were discussing the film creatively, Bhushan, being T-Series and having a keen ear for music, felt that there should definitely be a lip-sync song. I already had an idea of including a song which could take the story ahead. I did not want an item number that comes and goes. We knew that the song should be able to say something in the film. By its name, ‘Bewafa Beauty’ states that it is about a beauty who is unfaithful, which is the premise of the film — a man whose wife is cheating on him.”