Damien Chazelle on Sunday became the youngest ever filmmaker to win the Oscar for best director for his whimsical musical “La La Land,” which took home a total of six awards.

Chazelle’s latest movie, an opulent tribute to the musicals of Old Hollywood, has already earned a record haul of seven Golden Globes and numerous trophies from Hollywood’s various guilds.

The six golden statuettes came despite the last-minute chaos of the film being handed the best picture prize… only to have it taken away due to an error and handed to “Moonlight.”

The American filmmaker, who celebrated his 32nd birthday in January, smashed an 85-year-old record held by Norman Taurog, who was born in the 19th century and was 222 days older than Chazelle when he was recognized for comedy “Skippy.”

“This was a movie about love and I was lucky enough to fall in love while making it,” said Chazelle, paying tribute to his girlfriend in his speech.

A native of Rhode Island, Chazelle was born to Celia Martin, a writer, and French-American Bernard Chazelle, a pioneering computer scientist and a huge jazz and blues fan.

Inspired at a very young age by Edward Zwick’s epic civil war film “Glory” (1989), Chazelle had always planned to become a filmmaker but took up jazz drumming in high school, becoming obsessed and practicing up to eight hours a day.

It wasn’t until he started a degree in visual studies at Harvard that he realized his true calling was filmmaking. 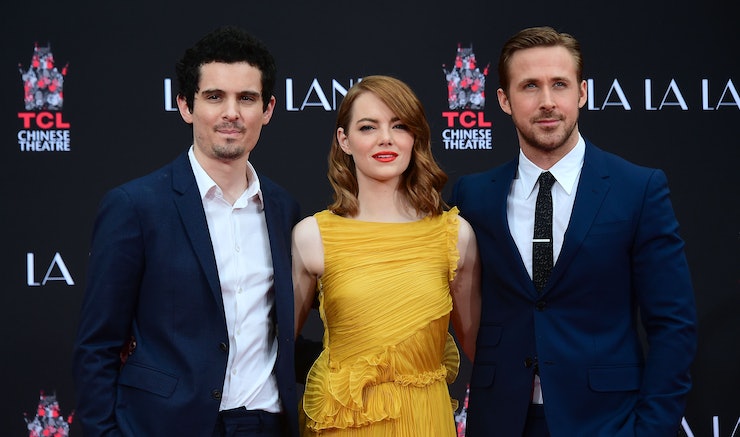 Chazelle wrote, produced, co-shot and directed the lion’s share of his first feature, jazz musical “Guy and Madeline on a Park Bench,” while he was still an undergraduate.

He continued playing the drums at Harvard, where he was in a band with Justin Hurwitz, who on Sunday won Oscars for best original song and score for “La La Land.”

But Chazelle had always suffered from crippling stage fright before performances and came to accept that his nerves would continue to be an obstacle to a career in music.

He told a recent roundtable discussion for directors organized by The Hollywood Reporter that he still gets nervous directing, or even watching screenings.

His experiences as an aspiring drummer were the inspiration for his darkly comic second feature “Whiplash” (2014) — the intense story of the stormy relationship between a bullying teacher and his jazz drumming student.

That movie swept up trophies on the film festival circuit and won three Oscars, including for best supporting actor for J.K. Simmons, and nominations for best picture and for Chazelle’s screenplay.

Chazelle told AFP in an interview in 2014 of his nostalgia for the Golden Age of cinema and musical comedies, performed by the likes of Jacques Demy, Ginger Rogers, Fred Astaire and Gene Kelly.

“It was the last generation who danced to jazz, just before rock. The 1930s to the 1960s is an era which means a lot to me, not only cinematically but musically,” he said.

Next up for Chazelle is “First Man,” a biopic on Neil Armstrong, with shooting expected to begin early this year and “La La Land” star Ryan Gosling due to play the iconic astronaut.