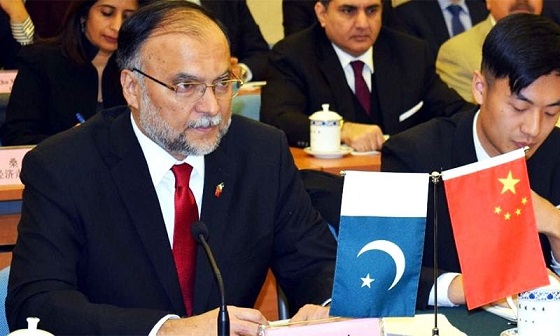 The decision was taken in the 6th Pakistan-China Joint Cooperation Committee (JCC) meeting regarding CPEC held in Beijing.

In his opening remarks, Ahsan Iqbal highlighted the significance of development projects in Gwadar, making a case for the master city plan and related projects in the city which he said are likely to bring socio-economic stability to Gwadar, according to the CPEC website.

The minister stressed upon timely completion of the Gwader water supply project, hospital and technical institute projects in order to facilitate residents of the area, and appreciated Chinese commitment to supporting the mass transit railway project in the provincial headquarters.

He added that one industrial zone in each province has been identified and selected on the basis of its market attraction and principles of business.

After a presentation by Sindh Chief Minister Murad Shah, the JCC decided to include the projects and asked the Sindh government to present a feasibility report within next three months.

It was expected that the Chinese government would announce financing of $1 billion for the completion of the three projects under the CPEC. The amount was to be spent on the construction of three additional routes related to the western route of the CPEC, according to officials quoted by Dawn earlier.

Sindh CM Murad Shah made a case for Karachi Circular Railways at the meeting, saying that the provincial capital is one of the most populated cities in the world, with an estimated population of around 25.1 million people in 2016 ─ a number greater than Tokyo, Guangzhou, Seoul, Delhi, Mumbai, Mexico City, New York, Sao Paulo, Manila and Jakarta.

The population of the city will touch 34.3m by 2030, he said. “Therefore, there are ample returns on investment if made in the city.”

Why Murad Shah thinks there is a need for KCR:

Shah pointed out that the burden of about 42pc of passengers fell on public transport, whereas private vehicles catered to only 21pc of commuters.

He said the solution of the problem lies in an effective mass transit system which includes the revival of the KCR, the Bus Rapid Transit System, and the Light Rail Transit.

The KCR was first commissioned in 1964 and remained an effective transportation system until 1984, he said. Due to certain reasons such as increased running time and lack of investment reduced its operational efficiency, he added. As a result, ridership fell and finally caused its closure in 1999.

The KCR project has been approved by the Executive Committee of the National Economic Council (Ecnec), the Sindh CM said.

A feasibility study was carried out along with third-party validation of the study, he said. An Environmental Impact Assessment has also been conducted and a relocation of utility services is not required, he said.

K-Electric has assured uninterrupted power supply for the project, he assured investors, and federal and provincial taxes are exempt on the project.

Integration with BRTS lines has been made and the institutional framework in the shape of the Karachi Urban Transport Company (KUTC) is available, he said.

The Japanese have estimated the cost of the KCR at about $2.6bn and developed the investment structure as 85pc debt financing and 15pc equity financing by the provincial and federal governments, he said.

The Internal Rate of Return is estimated at 13.8pc, he said, and the economic benefits include reduced vehicle operation cost and travel time cost.

He invited investors to contribute in the equity of KCR along with federal government and Sindh government. He added that equity IRR compatible with infrastructure projects currently being developed in Pakistan would be offered to the investors.

Shah sought Chinese cooperation to include the project in the CPEC after Prime Minister Nawaz Sharif approved its inclusion in the initiative and provided a sovereign guarantee.

The JCC decided to include the project and asked the Sindh government to present its feasibility within the next three months, upon which Shah directed the Transport Minister Syed Nasir Shah to expedite work on the feasibility of the projects within the stipulated time.

Shah told the JCC meeting that the Keti Bandar project is ideally located to serve as a power park for the Thar coal project due to its proximity to the coal field as well as Karachi.

Why Murad thinks Keti Bandar would be an ideal power park:

The Sindh CM said the Thar coalfield has been declared as a Special Economic Zone, and projects supporting it receive multiple economic benefits.

Disclosing his strategic plan, the chief minister told the meeting that with the construction of new jetty it would be possible to exploit the full potential of Thar’s coal reserves, minimise cost of electricity production at Thar coal and enhance the country’s competitiveness by providing affordable electricity.

Murad Shah claimed the power park would have 10,000 megawatt power production capacity and a transmission line would connect Keti Bandar to the Jamshoro and Matiari grids.

A 235-kilometer-long railway line from Islamkot to Keti Bandar would be laid to transport coal, he said, adding that a 190-km-long road would be constructed to connect Keti Bandar with Nooriabad.

Shah said a comprehensive bankable study of the coal reserves is being conducted and the master plan will cover all auxiliary infrastructure.

He requested the JCC to approve the project in principle as discussed in the Transport Infrastructure Joint Working Group in November 2016 and vowed to present a detailed bankable feasibility report in the next working group meeting.

The JCC included the Keti Bandar Power Park and sea port project in CPEC and decided to conduct a feasibility study.

Every province to get an SEZ

Dhabeji stretches over 1,000 acres and is located about 55km from Karachi at the eastern alignment of CPEC (N-5) or the M-9, Shah said, adding that it has commercial viability and development potential in the immediate term.

Keti Bandar’s SEZ, he said, stretches over 3,000 acres and is 153km from Karachi. The industrial potential will be realised after construction of a port, he said, which he proposed should be part of the medium-term plan.

Murad told the JCC meeting that a soil investigation has been conducted on both proposed SEZs and a commercial feasibility and master plan will be compiled shortly.

The JCC decided to give an SEZ to every province, including Sindh, which would have the Dhabeji SEZ.

Sindh Minister for Industries Manzoor Wassan urged the JCC to include the Khairpur Special Economic but it was decided that only one zone would go to Sindh.

The JCC asked Sindh government to work out a detailed plan and feasibility of the project to formally approve it.