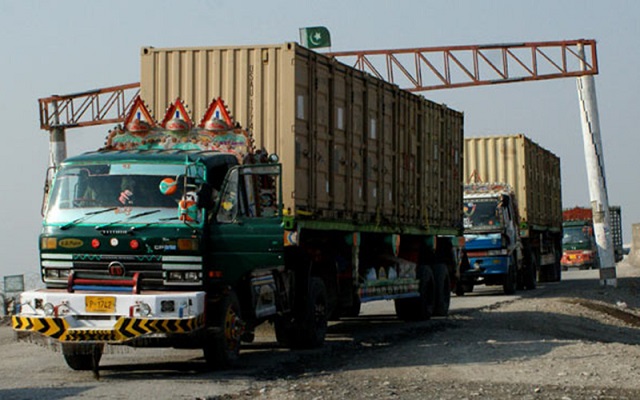 Lack of proper measures to control the incessant flow of smuggled items through the porous Durand Line from Afghanistan into Pakistan has caused an estimated Rs100 billion loss to the public purse over the last two years alone.

Data provided by the customs department shows that 70 per cent of the total goods exported to Afghanistan under the Afghan Transit Trade (ATT) are smuggled back to Pakistan through various points duly guarded by the law enforcement agencies.

Last year, more than Rs140 billion worth of goods were smuggled back to Pakistan.

Talking to The Express Tribune, officials at the department confirmed that Khyber-Pakhtunkhwa and Federally Administered Tribal Areas have been generating Rs100 to Rs130 million daily through taxes, much lower than the amount smugglers generate through smuggling across Durand Line.

A huge quantity of the smuggled goods is brought back in connivance with government departments working in the tribal agencies that not only end up at different markets in Peshawar but is also sent to other provinces at lower prices.

Another lucrative smuggling that involves billions in revenue is that of vehicles. The official said that around 2,000 non-customs paid vehicles and spare parts are smuggled into Pakistan.

These vehicles are then taken to different parts through different routes passing through Zhob, Waziristan, DI Khan, Malakand Division and Mianwali.

Official data revealed that there are 200,000 non-customs paid vehicles only in Malakand Division which is a serious security threat to the already volatile peace in Pakistan.

Officials at customs department claimed that the federal government has designated power of Customs Department to Frontier Corps.

With proper resources and huge manpower, FC controls around 18km area inside Fata while political administration has the power to use customs department’s power inside Fata. On the other hand, customs department has to monitor the 2,400km long border with just 300 men and limited resources.

“Given such meagre resources, it is impossible for us to control these illegal businesses that involve around 50,000 people most of them with strong political backing,” the official insisted.

He revealed that the department requested the federal government to recruit 1,800 men, including 100 constables, 300 inspectors and clerical staff but nothing has been done so far.

“The government could avoid this Rs100 billion loss by spending just Rs2 billion but who cares,” he added.

The Express Tribune also talked to people who transport the smuggled goods onward from Fata to different parts of Peshawar and other provinces.

“I receive Rs7,000 daily for transporting clothes worth Rs0.3 million excluding bribes ranging from Rs200 to Rs300 that is paid on every checkpoint in Peshawar,” claimed a smuggler who introduced himself as Yaqoob. He said he has to pay Rs0.3 million if the clothes are confiscated.

According to him, around 1,500 vehicles are involved in ferrying smuggled goods from Karkhano Market, to the General Bus Stand for transporting them onward to different parts of the country.

The government data revealed that distributed goods of only three to six containers is transported to Haji Camp Adda through motorcycles, cabs and public transport.

Collector Peshawar Qurban Ali Khan told The Express Tribune that the government was bound under international law to let Afghanistan use its routes for trade. He said that Afghanistan has been using Pakistan’s routes since 1995. He said that ATT was signed in 2010.

Peshawar police chief Tahir Khan said that all departments concerned should work together if the government wanted to stop the illegal trade. He said that he is in favour of joint check posts to stop smuggling.

“Constructing a toll plaza on the Pak-Afghan Highway, besides setting up Customs Department checkpoints and fixing proper rates for every vehicle and item with strict monitoring could help control the smuggling,” commented Ziaul Haq Sarhadi, a trader, involved in import export business under ATT.

Sarhadi revealed that government has imposed a ban on over 17 items, including cigarettes under the agreement that forces Afghan traders to import them from India, causing a heavy loss to Pakistan.