ISLAMABAD:  – It’s been five days since Professor Salman Haider had gone missing in Islamabad near Bani Gala area yet no trace of him has yet been found, reported Dunya News.

According to sources, special investigation team of police has been formed to investigate the disappearance under the headship of Captain Ilyas. SP Mustafa and DSP are also in the team.

Sources told that Salman Haider was picked up from a point where Safe City camera hasn’t been installed. Just one Prado car can be seen following him at one spot.

On the other hand, civil society and students staged a protest outside National Press Club. The demonstrators were carrying placards in their hands. They raised slogans against the government. The protest was also joined by political leaders who said that all political activists including Salman Haider must be recovered.

The protesters demanded that the government must answer for National Action Plan. They also lit candles on the occasion.

Shami said that the police and various intelligence agencies working in Punjab must make sure that the missing bloggers and social media activists be recovered.

“I’m not saying that these people were necessarily picked up by our security agencies; this could very well be the doing of some private organisation. But it is the duty of these security agencies to recover them all”.

Dunya News’ program Nuqta-e-Nazar host Ajmal Jami told on the show that four activists including Salman Haider were missing. The other three are Asim Saeed from Lahore, Ahmad Waqas Goraya from Lahore and Ahmed Raza Naseer from Nankana Sahib.

He added that one of Salman’s brothers, Zeeshan Haider, works for BBC while the other one Faraz Haider works for Samaa News and both are worried for their brother. “They are worried that their brother needs medication for allergy but they have no idea where Salman is”, said Jami. 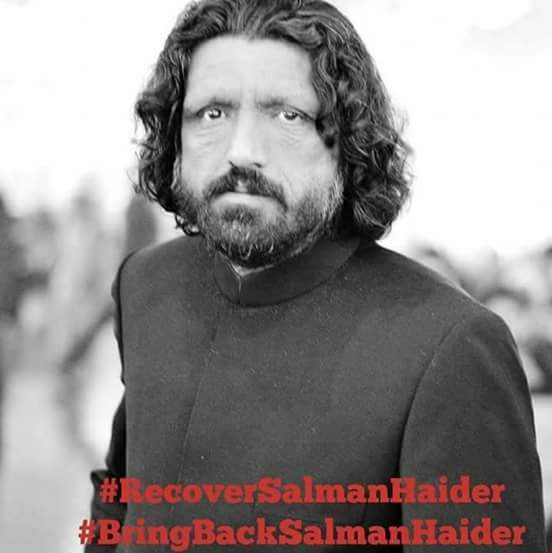 My elder brother @salmanhydr is missing from Islamabad for last 30 hours.pls pray 4 his quick recovery.#SalmanHaider#RecoverSalmanHaider

Shami said that these people must be recovered at any cost. “If these people have been picked up by the agencies then their families must be informed about their whereabouts. And if they have nothing to do with it, even then they must recover these people, investigate the matter and bring the culprits to the book”, he said.

According to details, the professor went missing from Bani Gala on Friday night after which his car was recovered by security officers from Koral Chowk.

Social activist’s brother Zeeshan said that Salman was with his friends at Bani Gala from where he called his wife that he will reach home by 8pm but didn’t return.

An FIR of the incident has been lodged.