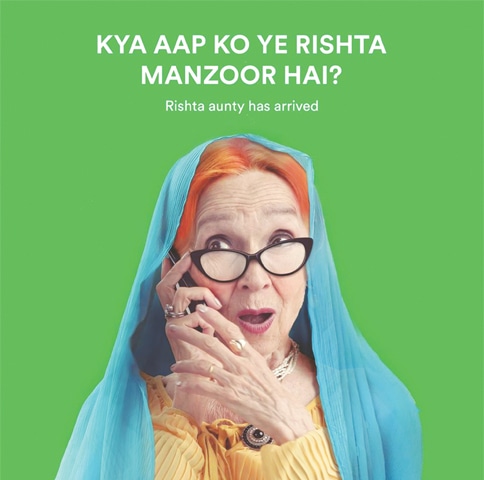 MUDDLED by thoughts reflective of years spent in mental exhaustion for being the only unmarried girl in her large family, 28-year-old Shehla is confounded by an email notification that reads “your rishta has arrived.”

For Shehla, the word rishta [proposal] is a grim reminder of her insecurities and shortcomings. “Ever since I touched 25, not a single family occasion has passed where I haven’t been prompted to get married,” she says, sighing. “Initially, it was my passion to work at a career. As the years passed, my age took the blame. It is always my mistake.” Caving into societal pressure, Shehla booked herself a Rishta Aunty Car.

On Wednesday morning, a startling move by the ride-hailing app Careem left users perplexed with their “public engagement initiative” as it launched a two-day matchmaking campaign with the Rishta Aunty Car. “Careem offers you the halal [permissible] way to find the right person. Have a rishta aunty accompany you during your ride,” the campaign read, which was initially assumed by many to be a marketing ploy.

In a closely knit social fabric, one that feeds onto the institution of marriage as a necessity over choice, the initiative gave rise to a medley of emotions. Rishta aunties, despite being largely despised for harbouring stereotypes and regressive ideas, are a significant part of the matrimonial culture in South Asia. Contrary to popular sentiment, and quite astonishingly, the rishta aunty circuit has evolved with a shift in socio-cultural values. While images of old, dupatta-clad women wearing wired spectacles that are fluent in local languages are conjured up with the thought of rishta aunties, the Rishta Aunty Car revealed otherwise.

“Any business can fall victim to inflation, but the marriage business is always in demand,” says Sumaira, a professional rishta aunty who is part of the Careem initiative. She assembles a pile of questionnaires filed by applicants interested in the hunt. “People think this is an easy job. But we have to study market trends like other entrepreneurs. These days if you aren’t tech-savvy, good families [established families] won’t come to you,” she explains somewhat defensively.

The rishta questionnaire, she shares, has to ask the relevant questions. “Earlier, families relied on looks and community, but these days demands have changed. Now, girls want to seek a career after marriage and boys want someone desi,” Sumaira says. Asked about what falls under the desi category, the rishta aunty casually quips: “You know, not these feminists.” The fact that feminism has established itself as a category in the rishta circuit says a lot about changes in social discourse at the ground-level.

The campaign, largely criticised on social media for its ‘backwardness’, brought an array of concerns to the forefront. While one stratum of society struggles to fight societal pressure to get married, a significant chunk of the populace is in search of “reliable” avenues for matchmaking.

“I am a divorcee and a widow,” says Maryum. “People call me unlucky for men. But I have two daughters who I wish to be brought up under a father’s protection. This is a safe and confidential way for me to find a prospective husband without my family’s help. Mein majboor hoon [I am obliged],” she says helplessly.

There is no dearth of matrimonial bureaus and websites in Pakistan. For years, newspapers have run a separate section for ads soliciting proposals that feature a short portfolio of the prospect groom or bride. The age, community, faith, profession and physical appearance in terms of height and colouring are presented in flamboyant words so that they stand out.

“Writing proposal ads was once an actual profession where people were paid to write good descriptions,” recalls 50-year-old Aftab, a resident of Korangi. “Before I got married, I had only seen my wife in a picture that was taken at a studio solely for the purpose of the marriage hunt,” he laughs.

As family culture progressed from the joint to the nuclear system, and with the expansion of urban settlements, communal distance grew which led to the weakening of trust between social networks.

“The concept of rishta aunties emerged from integrated neighbourhoods,” Aftab tells Dawn. The most trusted and well-connected resident of the area, he says, would be aware of prospective girls and boys and would share information with those interested. “Times have changed now. People don’t trust each other. That’s why failed marriages are so common,” he laments. The Rishta Aunty Car remained “out of capacity” during the two days of the campaign. “Kuch toh baat hai na hum mein, log atay zarur hain [There is something special about us, people do come to us],” rishta aunty Sumaira smiles. The driver’s phone beeps: ‘Your destination has arrived.’