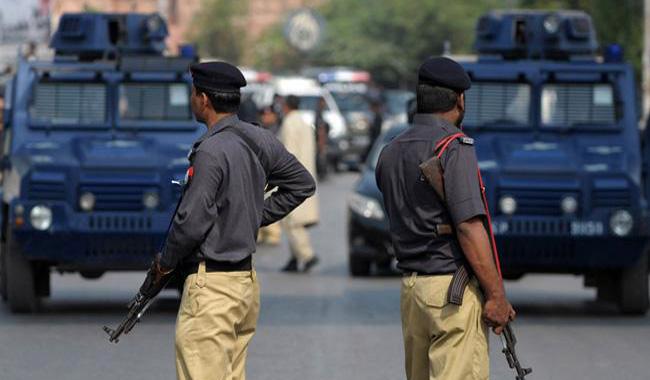 KARACHI: Police on Monday claimed to have killed four terrorists in late night shootout in the jurisdiction of Sachal Police Station, hours after the killing of a traffic policeman at Abul Hasan Ispahani Road, SSP Malir said.

Talking to media Senior Superintendent of Police (SSP) Malir Rao Anwar said that on a tip-off, Police carried out a targeted raid in a house at Abul Isfahani Road in the jurisdiction of Sachal police station.  As the police entered the house to approach the alleged terrorists, they suddenly resorted to firing, while police effectively responded and in retaliation all four terrorists got killed, SSP added.

As per details, alleged terrorists were planning to carry out another attack on police party, which was effectively foiled. Mullah Akbar Swati, commander of a banned outfit was among the terrorist who were killed in an encounter, police said.

Police claimed of confiscating weapons from the possession of the terrorists who have affiliation with a banned outfit.

Heavy contingents of police have been called in to cordon off the entire area and launched a search operation.

Earlier, unknown assailants riding on a motorcycle targeted two traffic policemen, Constable Kamran and Head Constable Mohammad Khan, at Abul Hasan Ispahani Road while they were busy regulating traffic. Both were shifted to a nearby hospital, where one of them was pronounced dead on arrival, he added.