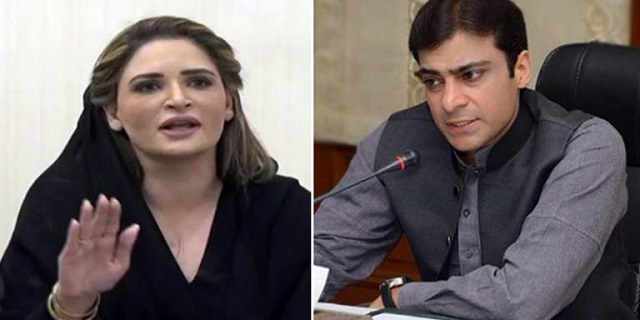 LAHORE – Ayesha Ahad, allegedly former wife of Hamza Shehbaz has claimed that she also has text messages to prove that Pakistan Muslim League-Nawaz (PML-N) could not guarantee the sanctity of women within the party.

She said that Hamza Shehbaz is neither Sadiq nor Ameen.

Ahad made the demand in a press conference in the company of Pakistan Tehreek-e-Insaf (PTI) leaders Firdous Ashiq Awan and Yasmin Rashid.

Ahad demanded that a committee be formed to probe her allegations just as a parliamentary committee has been formed to investigate former PTI member Ayesha Gulalai’s allegations of harassment against Imran Khan.

“Nawaz Sharif and Kulsoom Nawaz are witnesses to my matters,” she said. “Hamza Shehbaz lied to me. We got married in 2010,” she added.

Ahad stated that Hamza Shehbaz had told her that he had divorced Mehrunnisa and she had believed his lie and married him.

Ayesha said that she would go to the Election Commission of Pakistan and declare that Hamza was not Sadiq or Ameen since he had lied.

“At first I could not go to the ECP since these people were powerful but now that the Supreme Court has started giving such good decisions, I will go to the commission against him,” she said.

Ayesha reiterated that she was not going to the Election Commission to file a petition against Hamza Shehbaz on the behest of Pakistan Tehreek-e-Insaf.

Ayesha complained that the prime minister had formed a committee for one woman yet no one had done the same for her.

“Mian sahab, when will you have a committee formed for the daughter-in-law of your own house?” she asked.

Hamza Shehbaz, however, while talking to Geo News rebutted the claims, saying Ahad’s accusations are baseless and she had made the same accusations in 2014 in the court of law but was unable to present any evidence.

Ahad was proven to be a “liar” by the court for failing to produce any evidence, he said.

Almost immediately after her press conference, PTI chief Imran Khan tweeted asking the incumbent prime minister whether he will form a committee to “investigate serious allegations levelled by Ayesha Ahad”.

He also called for women’s rights activists to stand by Ahad for enduring seven years of physical and mental abuse at the hands of her alleged husband.