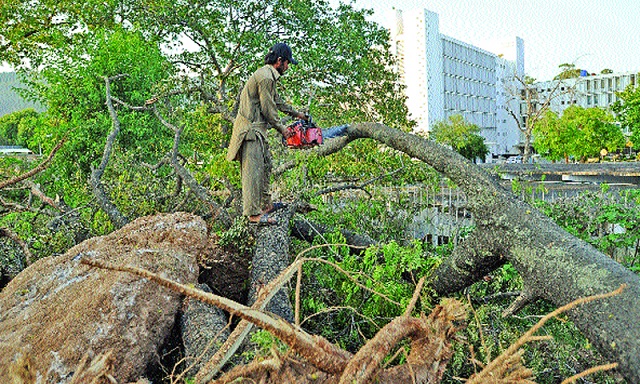 The federal capital is gradually losing its greenery despite annual mega plantation drives, under which millions of saplings are planted at every nook and corner of the city.

The survival rate of the saplings is also a matter of great concern because the Capital Development Authority (CDA) showed enthusiasm only during the plantation campaign, but the passion subsided with the passage of time.

There is not any effective mechanism of monitoring the newly-planted trees and nor is there enough staff to look after the saplings. As a result, most of them die within days after their plantation.

The federal capital has surroundings with a natural look, beautiful trees and beds of wild flowers but it is losing the precious greenery at a fast pace, which is a product of ill-planned development and poor management of the CDA.

Talking to this agency, F-8 sector’s resident Dr Irshad Khan said green belt located in the F sector has the largest number of the dead trees.

Greenery, once a hallmark of Islamabad, now only exists in the lawns of posh sectors; old trees needed to be protected before they get vanished forever, he opined.

Preservation of old trees is a common practice in the developed countries, but the quarters concerned here do not pay any heed to it, another resident Shazia Khan said.

She observed the CDA has chopped thousands of trees in the last few years but nobody knew where these trees have gone.

The CDA conducts a two-day long tree plantation campaign every year in which hundreds of thousands of saplings are planted, but, surprisingly, the result is quite opposite, as the tree cover in Islamabad is decreasing at an alarming rate.

However, a CDA official said the authority has increased the number of new saplings from 400,000 to 500,000 during the last Spring Tree Plantation Campaign.

Out of the total planted saplings, more than 50 percent plants have grown due to strict monitoring, while further measures will be taken to improve their survival rate.