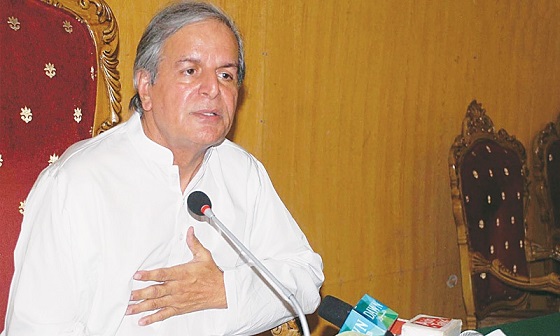 ISLAMABAD: Hitting out at Javed Hashmi for levelling allegations against him, Lt Gen (retd) Tariq Khan said that army bashing was being done at the behest of some ‘unscrupulous scoundrels’.

In a strongly-worded statement on his WhatsApp and Facebook, the ex-army commander refuted claims made by Hashmi in a TV interview that the former was involved in a planned coup against Prime Minister Nawaz Sharif in 2014.

“Of late, a politician by the name of Javed Hashmi has taken it upon himself to accuse me of planning some sort of coup in my time and day,” Lt Gen Khan said in his rejoinder.

The former army commander has asked the government to initiate a fact finding inquiry into the allegations.

The former Pakistan Tehreek-e-Insaf president had claimed that the coup was planned when the party’s chairman Imran Khan staged a sit-in in Islamabad to press the prime minister to resign over alleged rigging in the 2013 general elections.

“Imran Khan meant martial law when he said the umpire would raise his finger,” Hashmi was quoted as telling a private TV channel during the interview.

The retired general also denied he had attended any celebration, ceremony, marriage or funeral with politicians in attendance. “This is not because I think of politicians any lesser than myself but simply because my life, its conduct and its meaning never needed me to engage with politicians’’.

Defending his position for his alleged role in the country’s political affairs, the retired general explained that he did not know Javed Hashmi nor did he wish to know him in the future.

He recalled that Hashmi had made similar claims in the past which he had ignored them, assuming that having suffered a stroke he [Hashmi] was probably mentally challenged.

“His age is another factor. But his diatribe continues and is even worse than before. Had it just been my person, I would have allowed this to fade away as most nonsense does but this involves a whole institution, belittle its leadership and defames it in the eyes of the people for no reason and as such needs a response,” he said.

“As such these stories that Javed Hashmi is coming up with are a figment of his own imagination and I am surprised that his mental handicap is being exploited by the media.

If this gentleman is of sound mental health then his accusations make him a liar lacking self-respect. I would request a government enquiry into this matter,” he added.