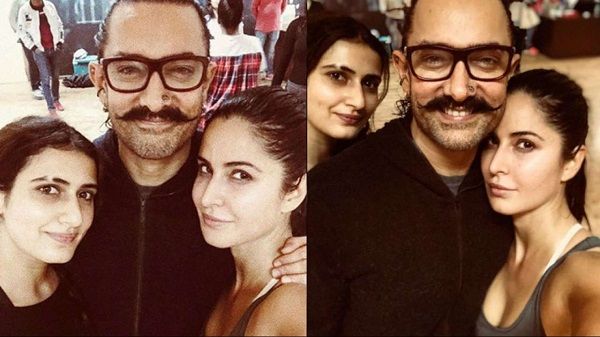 While we might never get the answer of which Khan is the best, we now know which Khan lives the Thug life like no other. And we have Katrina Kaif to thank for it. The Bollywood diva is juggling between three movies with the three Khans: Bharat with Salman Khan, Zero with Shah Rukh Khan and Thugs of Hindostan with Aamir Khan. After her picture with Salman s mother took no time to go viral (not surprising anymore), she now took to Instagram to reveal that Aamir lives the ultimate thug life.

The actress appears to have taken a break from the filming of the movie and got behind the lens to showcase Aamir s thug life. In the black and white picture shared, the actor is seated sporting his famous Thugs of Hindostan look holding a pipe and posing for the beautiful star. She captioned the picture: #thuglife. Aamir appears like the ultimate boss in the picture. The actor continues to sport the ear studs and mustache, as part of his look in the movie.

This isn t the first time she has made Aamir her muse. Earlier this year, the actress posed with the Dhoom 3 actor and Dangal star Fatima Sana Shaikh (who plays a crucial role in the movie) and shared it with the world. Amitabh Bachchan is also a part of the venture. A few pictures from the sets have already been leaked. During a press interaction Aamir addressed the leak and confirmed that Fatima is the actual lead of the movie.

Thugs of Hindostan is based on Philip Meadows Taylor’s 1839 novel Confessions of a Thug and is set to release this Diwali. The film is directed by Dhoom 3 director Vijay Krishna Acharya.