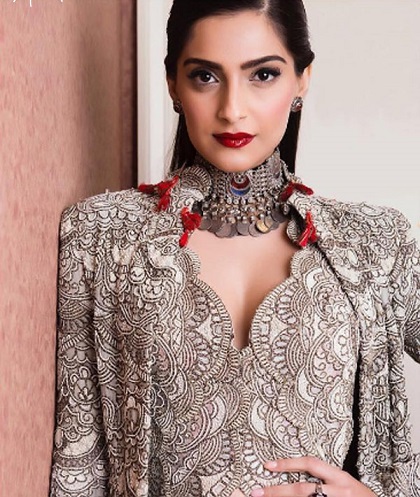 Sonam Kapoor is merely hours away from making a spectacular appearance on the red carpet at Cannes 2017 this year and just like every year, this year, too, we are expecting Sonam to SLAY on the red carpet. In case if you have been wondering what Sonam is going to be wearing at Cannes this year, we have got you an interesting scoop! In an EXCLUSIVE interview with BollywoodLife, Sonam and her sister Rhea shared some details about Sonam’s Cannes outfit. Sonam begins with saying, “My sister will be styling me…” Rhea adds further, “The idea that we are going for this year at Cannes is that beauty is within, beauty is timeless and both the outfits are inspired by Sonam and her personality and they’re very true toward what Cannes is, toward what Sonam is.” Now that’s pretty exciting!
The diva has always (well, almost always) managed to sweep us off our feet with her ultra glam avatar and this time, too, we are sure it’s going to be something extraordinary. If you remember, last year one of her outfits received a lot of flak on social media. She got trolled big time for it but that hasn’t ever stopped her from taking risks. Let’s hope that this time, too, she doesn’t play safe and opts for something dramatic and bold. Just recently, Sonam and her sister Rhea have come up with their own label “Rheson” which has been garnering a lot of attention. The prints and themes are very fresh and different – something that every other girl can relate too. The brand got launched last week and so far, the response Sonam and Rhea have been getting for it is fabulous. Let’s see that’s the exact same response Ms Kapoor gets for her red carpet avatar at Cannes 2017 too!