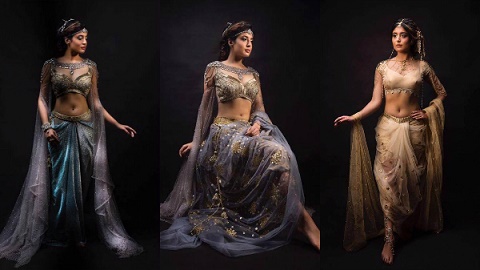 After being absent from the small screen for more than a year and a half, Kritika is now all set to make a comeback on television as a princess Chandrakanta on her show, Chandrakanta – Prem aur Paheli on Life Ok.

Kritika made her debut with Yahan Ke Hum Sikander with Ravi Dubey. She shot to fame with Kitni Mohabbat Hai with Karan Kundra. The Ekta Kapoor show was a bitter sweet love story where she played Aarohi. The show had two seasons and made Kritika a popular TV star. She later did a couple of shows with Sony TV, Kuch Toh Log Kahenge where she played a doctor and Reporters with Rajeev Khandelwal. Kritika took part in Jhalak Dikhhla Jaa 7 too.

Chandrakanta marks the actress’ comeback to the small screen. The show will be a bi-weekly one like Naagin 2 and will, in fact, compete with the supernatural show. If you didn’t know this already, Ekta Kapoor is also planning to produce a show based on Chandrakanta and has even started working on it. The series, that will air on Life OK with Kritika Kamra in it, is set to go on air in March 2017 and Ekta Kapoor’s will also be launching her version of the show around the same time. The fantasy drama is based on Devki Nandan Khatri’s novel of the same name. It’s expected to have a lot of special effects that will attract kids and family.

Talking about the content fight between the two channels in an earlier interview with Times of India, Kritika said , “I had no clue about two producers working on the same subject. I realised it only when I saw both the teasers on the internet. Ekta has given me memorable shows and I am still remembered as Arohi from ‘Kitani Mohabbat Hai‘. The rivalry could be between the channels or the production houses, but not between Ekta and me. We are friends and I’m sure she would be happy for me. Also, the fact that there are two shows will make the competition interesting. In the end, good content will win the audience’s heart. Having said that, I want both the shows to do well.”

The thrill of doing a costume drama attracted Kritika for the project. She told the publication, “”I have never been part of a costume drama before. I have watched the first ‘Chandrakanta‘ as a child, but nostalgia isn’t the reason I am taking it up. I found the script interesting. The central character is not only a beautiful woman, but she’s also a fighter and has a sense of purpose.”