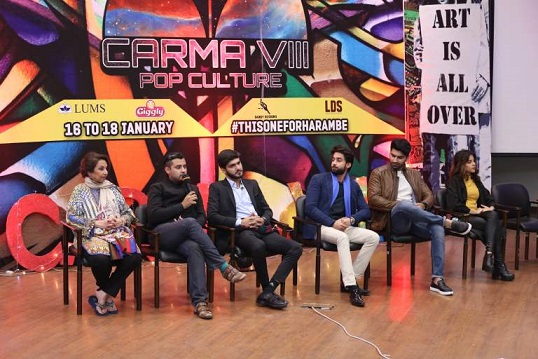 Convention for Aspiring Reporters and Media Anchors is an annual event hosted by LUMS Daily Student, the university’s flagship journalism society. First launched in 2010, CARMA has established itself as a premiere journalism event catered towards students representing academic institutes from all over Pakistan.

For the past eight years, CARMA has provided young, aspiring journalists with a platform to connect with each other as well as individuals experienced in the field. CARMA has a wide range of events, providing delegates with the opportunity to experience both the electronic and the print medium. The intriguing events are designed to spark an interest in the profession and encourage participants to think outside the box and challenge their investigative abilities.

CARMA has always been a frontrunner in raising controversial issues which may otherwise be silenced due to the cultural boundaries of Pakistan. This year a new event, with a focus on photojournalism, called “Snap It” was introduced. A lot of taboo issues were highlighted such as the plight of the transgender community, tribal controversies and even Indo-Pak relations.

The Pakistani media has a history of not recognizing the sensitivity of these issues and CARMA was careful to not only maintain journalistic integrity but also stay within the realm of ethical constraints so as to tackle these issues in a respectable manner. Journalism is the voice of reason, the voice of people, thus it is absolutely necessary to instill the need for ethical journalism so as to be able to inform the masses in a responsible way. The event informs, educates and polishes journalistic capabilities of hundreds of aspiring individuals from across the nation.

The three-day event was also attended by a well-known names such as Mr. Adeel Hashmi, who addressed the opening ceremony and stressed on the importance of celebrating Pakistan’s own popular culture, and Ustad Hamid Ali Khan, whose performance on the Qawali Night left everyone in awe.

The casts of two upcoming movies “Thora Jee Le” and “Ballu Mahi” also graced CARMA with their presence to promote their movies and brought forth unmatched energy in the delegates. The three day event informs, educates and polishes journalistic capabilities of hundreds of aspiring individuals from across the nation.