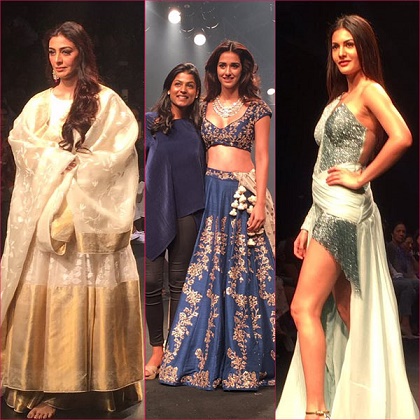 After a scintillating start to day 5, Disha Patani, Tabu and Amyra Dastur took over the baton and impressed us. The actresses walked the ramp with poise and looked really refreshing and stunning. While Disha walked for Jayanti Reddy, Amyra walked for Karn Malhotra and Tabu walked for Gaurang in the afternoon shows.

Disha looked sizzling in a blue lehenga choli. Her outfit had a lot of intricate golden, floral embroidery. Disha paired her outfit with a printed dupatta and a diamond necklace. Tabu, on the other hand, wore a beautifully draped, white Indian saree. It had a lot of floral, white embroidery, which uplifted the outfit. Meanwhile, Amyra sported a blue tulip inspired silhouette. The dress was glittery and glamorous with a lot of dramatic cuts and tassels. The actress truly looked like a diva in the dress and we couldn’t take our eyes off of her.

Talking about the collections, Jayanti Reddy’s line boasted of lots of modern, Indian dresses, lehenga cholis, sarees and much more. She made use of lot of tassels and showed off her embroidery skills too. Gaurang’s collection this time around was white and white. We saw a lot of different kind of dresses and sarees, rich in embroidery and handicraft. It was a truly amazing collection. Karn’s collection, on the other hand, showcased a lot of evening wear dresses, gowns, tops and much more. Sexy is the word to describe his line as he went all out to make his outfits comfortable yet hot. We saw the designer experiment with a lot of colours, embellishments and tassels this season.

On the professional front, Amyra and Disha were last seen in Kung Fu Yoga. They both are yet to make an announcement about their next projects, Tabu, on the other hand, was last seen in Fitoor. Anyway, check out all the pictures and videos from their shows right here: Coming back to Lakme Fashion Week Summer/Resort 2017, day 5 has been really refreshing. After an average day 4, we saw a lot more star presence and energy today. The day started with Malaika Arora and Jim Sarbh walking the ramp. We expect to see Sushmita Sen, Shilpa Shetty, Kareena Kapoor Khan and a few others hit the runway soon. So stay tuned to BollywoodLife as a get you all the LIVE updates from Lakme Fashion Week 2017 right here…