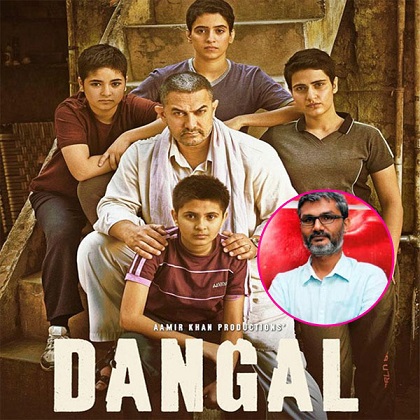 Dangal director Nitesh Tiwari says it’s the honesty and sincerity that went behind the making of Dangal, which was backed by an immensely talented cast, that worked in making the movie the highest grosser of Hindi cinema. The film is nearing the Rs 400 crore mark at the Indian box office. It was expected that Tiwari would change overnight after the grand success of Dangal. He didn’t. As Dangal goes from success to success, the man who helmed the epic remains monkish in his detachment. Producers are lining up to sign Tiwari. There is tremendous pressure to do a sequel to Dangal, and if not direct a sequel, then at least another sports film. Always one to be unapologetic about the cinema that he believes in, Tiwari attributes the success of Dangal to several factors, the least of them being his own storytelling skills.

“I think the honesty and sincerity with which Dangal‘ has been made has worked in its favour. We gave it all the time it deserved, all the effort it deserved, all the scale it deserved,” Tiwari said. Tiwari hits the nail on the head when he speaks of the participative mood that Dangal creates, so that the audience feels one with the struggles of a father’s ambitions to make his daughters world champions. “We wrote it and shot it with the intention of giving our audience an engaging story in which they could participate as well. The characters and their emotions were kept extremely real and relatable. And the added layer of humour made the film even more enjoyable.

“The icing on the cake is that people are not just loving the movie but they are also able to see and appreciate the effort that has gone into making it. That’s what has made Dangal connect with people in such a big way,” Tiwari said. Now that Dangal has been declared the biggest success of Hindi cinema, Tiwari isn’t putting any pressure on himself to deliver something bigger

“It’s very natural that the success of Dangal would put pressure on me. But I have to be practical about it. Dangal had a beautiful script, a legend like Aamir Khan and a bunch of hugely talented and committed artistes and technicians. One can never be certain but one can only hope for the same to happen again,” he said.

So would it be a Dangal follow-up next?