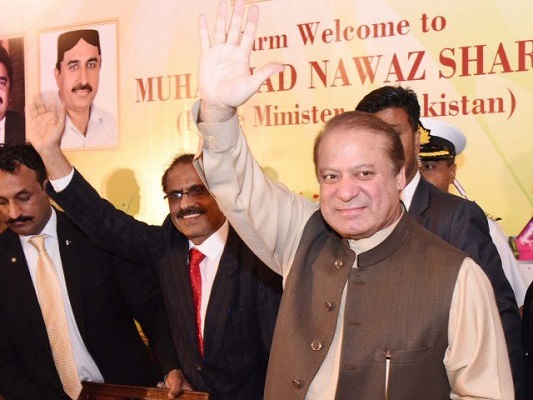 Prime Minister Nawaz Sharif has said Pakistan was created to fight religious persecution in the subcontinent.

“It is not up to us to decide whether one will go to the heaven or hell, but to make this place a heaven on earth,” the prime minister said while addressing a gathering to celebrate Holi with Hindu community in Karachi on Tuesday. “Forced conversion is a crime in Islam.”

A message to the World, all religions and communities living in Pakistan are united in the leadership of Prime Minister Nawaz Sharif pic.twitter.com/eqI9sfRyHp

Congratulating Hindus on the religious festival, PM Nawaz said Pakistan was home to people from diverse backgrounds. “We jointly share our happiness and sorrow,” he said.

Directing authorities concerned to provide ample security to all religious places, the premier said, “Government has materialised its promise of bringing peace to Karachi”.

“Pakistanis never accepted an atmosphere of fear and chaos, and want peace and harmony,” he said, adding the country has the brightest future in Asia. “Anyone committing a wrongful act deserves punishment, irrespective of their religious belonging.”

Nawaz said he will stand with anyone who is oppressed or has been suppressed.

Meanwhile, in a meeting with the business community of Karachi, said the government had significantly improved the country’s economic outlook, which has also been acknowledged by international financial institutions.

“Pakistan is now termed as an attractive destination for business and investment,” he was quoted as saying in a statement released by the Prime Minister’s Office.

As a result of investor-friendly policies, he added, international investors and companies had shown interest in exploring business and investment opportunities in the country.

The meeting was attended by Sindh Governor Muhammad Zubair and planning minister Ahsan Iqbal, among others.