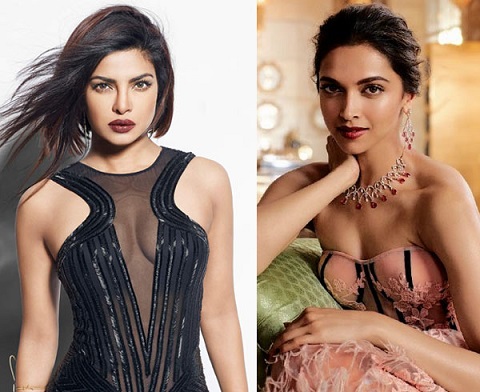 Priyanka Chopra and Deepika Padukone‘s battle was one of the most spoken about things in 2016. They are currently the biggest stars in Bollywood and India, however they are competing to become a bigger brand. And with their Hollywood debuts (Baywatch and xXx:Return of Xander Cage respectively) coming up, they are going all out to out-do each other. But it looks like Priyanka Chopra has already beaten Deepika. The Quantico star has beaten Deepika and Alia to become the most spoken about actress on Twitter in 2016.

Twitter released a social media report today, where Priyanka topped the list and emerged as the most talked about female actress in 2016 with 23 percent of all the conversations in 2016. She is followed by Alia Bhatt, who has a share of 18 per cent. Deepika Padukone only managed to come in at number 3, followed by Anushka Sharma and Shraddha Kapoor. Kajol, Jacqueline Fernandez, Parineeti Chopra, Sonam Kapoor and Sunny Leone complete the list of the top 10 most spoken about female celebrities in 2016. Check out how the top 5 line up right here: What do you have to say about Priyanka beating Deepika to become the most spoken about actress in 2016? Share your thoughts in the comments section below!