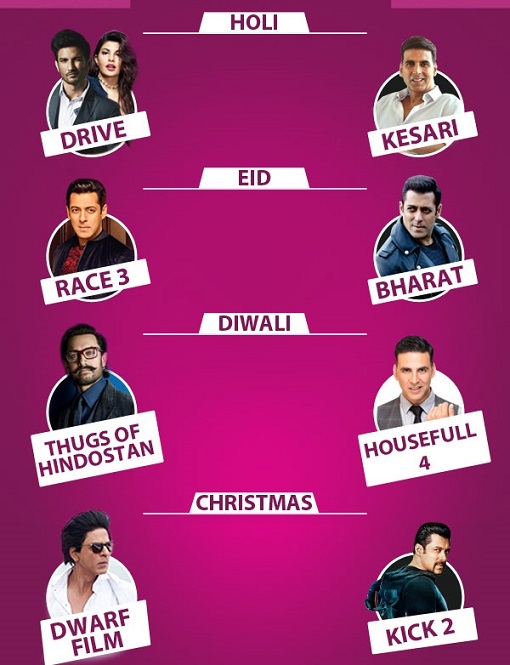 Your movie outings for next two years during the many festivals are booked… Save your dates for Shah Rukh, Salman, Aamir Khan and more!

2017 will be over and done in a matter of two months. It will be a new year and fresh start hoping that the next year will be better. This year has thrown a lot of surprises our way. It is also one of the most disappointing year at the box office with biggies flopping at the box office. Even after the release of so many films, only a handful of them managed to set the cash registers ringing. A lot of emphasis is given on festivals in Bollywood because that’s when the audience likes to catch latest movies. In fact, there are internal wars between filmmakers to grab a favourable festival to get maximum gains. After all, films have humongous budgets and they at least have to break even, although that doesn’t help Bolywood much. 2018-2019 won’t be different either. The festival dates have already been booked for next two years and we have it all here for you.

Drive is an official remake of a Hollywood film by the same name. It starred Ryan Gosling and Carrey Mulligan. It is about an unnamed driver who turns into a getaway driver by the night. The Indian version stars Sushant Singh Rajput and Jacqueline Fernandez. It will be directed by Dostana director, Tarun Mansukhani.

Now what do we say about this film. One franchise which keeps churning out films, irrespective of how the response garnered. The fact that they manage to make money perhaps give producers the faith that people are interested in sex thrillers. This time the film will have Urvashi Rautela and Karan Wahi in the lead.

The third film in the franchise was long overdue and finally, we have confirmation that it is happening. The replacement of Saif Ali Khan by Salman Khan did come as a shocker to many. In our poll, Bollywoodlife readers made their displeasure with the casting apparent as well but then you never know, it may turn out to be an awesome deal too. The director’s baton has also been passed on to Remo D’souza from Abbas-Mustan. An Eid release is only obvious for a Salman Khan film, you see!

Diwali suddenly has become Aamir Khan’s thing. This year, he released Secret Superstar where he did a cameo and next year, there will be Thugs Of Hindostan, which has him alongside Amitabh Bachchan. Dangal’s Fatima Sana Sheikh and Katrina Kaif are also pivotal to the story. 2018’s Diwali will be big too…

This is one film everyone is eagerly waiting to watch next year. Shah Rukh Khan will be seen as a dwarf in the film. It even has a cameo by Salman Khan. The cast also includes Anushka Sharma and Katrina Kaif. The film has been scheduled to release on Christmas next year.

After rocking Republic Day and Independence Day, Akshay Kumar has now decided to focus on Holi instead. His film with Karan Johar’s Dharma Productions will release in Holi 2019. It is one of the three films that are being made on the epic battle of Saragarhi. Yes there are three…the other two star Randeep Hooda and Ajay Devgn respectively.

Salman Khan again booked yet another Eid for his next film titled Bharat. It will be directed by Ali Abbas Zafar and will be a remake of South Korean hit, An Ode To My Father. Katrina Kaif is likely to join the cast of the film. The shoot of the film begins from April 2018.

Now that came as a shocker. Honestly, none of us were expecting a Diwali release for Housefull 4. The films of this franchise made money whenever it released. With Diwali, it will only go bigger. Look what happened to Golmaal Again. Diwali is lucky for such films and Housefull 4 might just become the biggest hit of the series.

Although there isn’t any confirmation on the release date, Mumbai Mirror had reported that Sajid Nadiadwala has booked Christmas for the sequel to the hit 2014 Salman Khan film, Kick.

So your movie outings for the festivals in the next two years are sorted. Isn’t it?