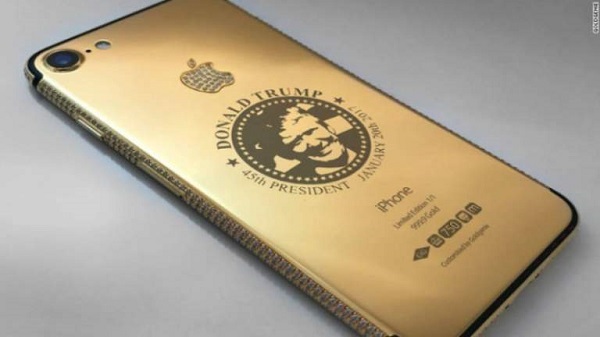 SHARJAH- Believe it or not, there is a gold-plated Donald Trump iPhone available in Dubai for a whopping price of Dh550K ($151,000).

Goldgenie, a luxury goods company famous for gold-plating just about anything for its wealthy clients, has recently launched a unique Donald Trump-themed iPhone 7 made out of solid 24K gold and encrusted with diamonds.

The device also comes with military grade encryption as well as call privacy features, among other perks.

The Goldgenie retail store in Sharjah, UAE, came up with the idea for this unusual product after it was specifically requested by a Chinese woman, last month. Frank Fernando, managing director of Goldgenie, declined to identify the customer by name, but said that he believes her family wants to give it to Trump himself after his inauguration, as a present.

Goldgenie claims it has had nine more orders for its unique Trump iPhone.

Not only that, the Goldgenie sales team is actually receiving several inquiries per day from people asking to have Trump’s face engraved on their own devices. The US President-elect is apparently really popular among the uber-rich.

Goldgenie started out in London, in 1989, and made a name for itself by gold-plating anything their clients desired. After Sharjah store, they now plan on opening a new one in neighboring Qatar and another in South Arabia.

Goldgenie is not the first company to make such a luxury item featuring Donald Trump. Caviar, a Russian-Italian company, launched a similar phone in November this year.

Cavier’s custom iPhone 7 has a gold back with an engraved portrait of Trump along with his tagline “Make America Great Again,” and the coat of arms of the United States. The phone costs about $3,082 (197,000 rubles).

Caviar made waves in 2014 when its gold-plated Putin phone, of a similar design, was passed around the internet (the company now has a few versions of that phone).

The company said buying a Putin phone was “the best way to express patriotism.”