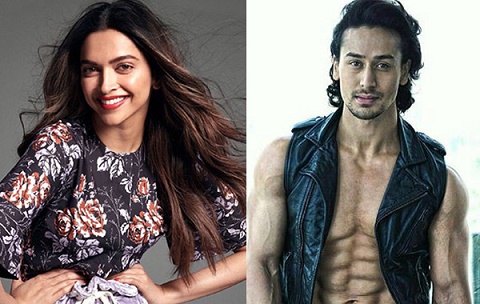 Tiger Shroff may hold a very calm and composed demeanour on the outside but he sure has his naughty mind working! The actor recently revealed that he’d like to kiss Deepika Padukone! You heard that right. We were watching Koffee With Karan’s episode where the actor made his debut and shared the couch with father Jackie Shroff. The episode had Tiger looking and being his cool best as he played it safe. However, when he was asked what he would do when given a chance to switch places with Ranveer Singh for a day, he had only one wish. “I’d give Deepika a big kiss and tell her no matter how many kisses I’ve done in Befikre, the most special one is with you. Everytime I kiss you, is special,” said the actor. Now that was totally unexpected. Well, who wouldn’t want to switch places with Ranveer or even DP for that matter. The sizzling couple continue to set newer levels of hotness with every appearance. Not to forget just how compatible and loving they are with each other.

We can expect something like this from many of the young boys in the industry as they have expressed it. However, coming from Tiger was quite a wave of shock. Throughout the episode, he was very calm, cool and diplomatic. When he was asked about his personal life and whether he is dating Disha Patani, the actor carefully answered by stating how she is his very good friend and is often misunderstood. Apart from that, he also openly expressed how he crushed hard on Shraddha Kapoor, who was his senior in school.

On a professional front, we’ll soon be seeing Tiger in Remo D’Souza’s Munna Michael and Karan Johar’s Student of the Year 2. It is believed that in KJo’s film, the actor will be the only male lead while there will be two female leads who will make a debut. A lot of names have been raised for the role, although none of them have been confirmed yet. It will be interesting to see what kind of story the filmmaker will cook up surrounding the actor. Unlike the first film where Alia romanced two men i.e. Sidharth Malhotra and Varun Dhawan, this time it’ll be two divas striking hot chemistry with Tiger.

Excited? What would it be like if Tiger and Deepika are cast together in a film? Tell us in the comments section below. Stay tuned to this space for hot scoop and latest updates