WASHINGTON (Web Desk) – Council on Foreign Relations recently published a blog on their website according to which the United States of America dropped about 26,171 in seven countries including Pakistan.

Other six countries included in the list are Iraq, Syria, Afghanistan, Libya, Yemen and Somalia.

The published article revolves around the fact finding investigation of exactly how many bombs did the US dropped on terrorism affected countries. It takes help from the data of airstrikes in Operation Inherent Resolve (OIR) which is the campaign to counter Islamic State (IS).

The data of airstrikes is given by OIR is shape of press releases. However, the information is vague as a single airstrike doesn’t account of how many bombs are dropped. It only gives data in general about the day to day coalition airstrikes. Pentagon’s own definition says that a single strike can involve multiple bombs.

The most number of bombs were dropped in Syria and Iraq, 12,192 and 12,095 respectively due to the presence of multiple terrorist groups of which IS is prominent. This is approximately 93 percent of the bomb dropped by US according to data. 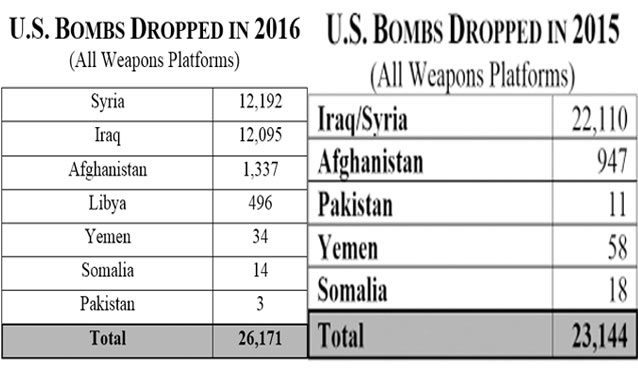 2016 was the last year for American President Barack Obama in which he emphasized on increasing airstrikes and reducing ground troops. It must be noted here that the President-elect Donald Trump is in favor of fighting with coalition and bombing the oil production of terrorist groups.