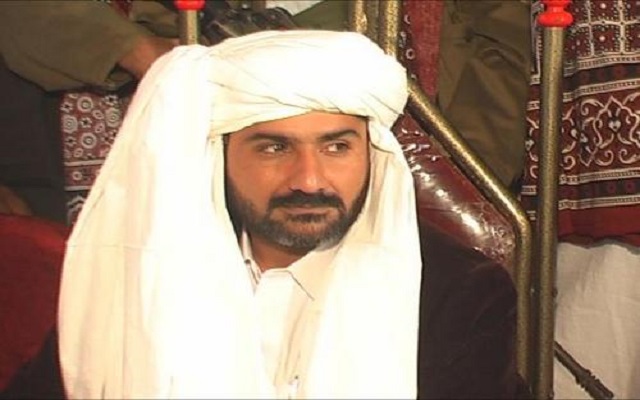 On charges of espionage (leakage of sensitive security information to foreign intelligence agencies). (2 of 2)

DG ISPR further said that Uzair has been taken into custody on charges of espionage, for leakage of sensitive security information to foreign intelligence agencies.

The Lyari gang war leader, who has close ties to the Pakistan Peoples’ Party (PPP), had confessed his involvement in killings of rival group members, including Muttahida Qaumi Movement (MQM) workers, supporters and police officials.

Baloch, a former chief of the defunct Peoples Aman Committee (PAC) who was declared a ‘most-wanted criminal’ by the Sindh government, had been in the custody of the Abu Dhabi police for nearly three months before his arrest.

He was detained in the United Arab Emirates (UAE) based on Interpol’s red-warrant on December 29 2015 at the Dubai-Oman border.

Uzair Baloch was arrested by Rangers on January 30, 2016.

Uzair Baloch remained in Rangers custody for 90 days after the arrest and then he was handed over to police.

After his 90-day remand in the Rangers’ custody, the gangster had made a confessional statement in front of a magistrate on April 24, 2016, where he accepted the charges levelled against him.

He also revealed that he leaked ‘sensitive information’ to foreign agencies. He claimed that a man identified as Haji Nisar, an alleged member of the Iranian intelligence agency, had introduced Uzair to other members of the agency.

Moreover, it was also revealed that Uzair played an integral role in the appointment of Saeed Baloch and Nisar Morai in the Fishermen Cooperative Society, which used to pay Rs2 million extortion on monthly basis to Uzair.

The gangster had also confessed to appointing those SHOs who helped him extend his criminal activities. He claimed that leaders such as Zulfiqar Mirza, Qadir Patel, Yousuf Baloch had helped him get SHOs of his choice posted.

Uzair took control of the PAC in August 2009 and is alleged to have been involved in a range of criminal activities including killings, extortion and terrorism. The PAC was banned on October 2011.

Uzair Baloch took over as the leader of Peoples Amn Committee in August 2009 when the notorious Abdul Rahman Baloch alias Rahman Dakait was killed in an encounter more than a year after the PPP government came to power.

Though the committee was presented as a community group by its leaders, it is blamed for its criminal activities, which included killings, extortion and drugs business by the police.

Currently, as many as 55 cases are pending against Uzair Baloch in various courts. Of these cases, one relates to the murder of Arshad Pappu and another relates to keeping weapons and explosives.

However, on April 08, 2017, Baloch and his brother Zubair Baloch were acquitted by a court of charges of attacking police during the Lyari operation in 2012.

The additional district and sessions judge (South) found no evidence of their involvement in the attack. Other accused in this case include Faisal Niazi, Badsha Khan, Naim Lahoti and Jahangir Khan.

The court directed the superintendent of the Karachi central prison to release Uzair and Zubair if they were not being tried in other cases.