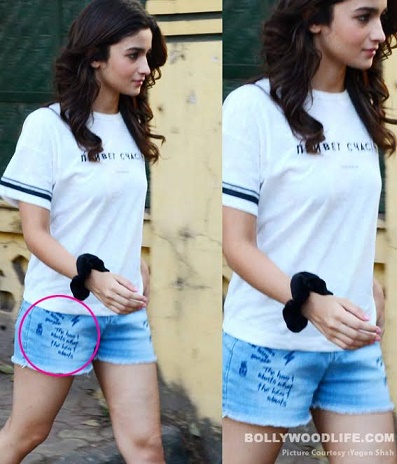 Alia Bhatt likes to wear her heart on her sleeves. Sorry no, correction. In her case, it’s on her denim shorts. We spotted the actress and Varun Dhawan hurriedly getting inside Dariya Mahal. The duo is shooting for Badrinath Ki Dulhania, which is a sequel to the earlier hit Humpty Sharma Ki Dulhania. Alia looked pretty cool in white T-shirt and denim shorts. But it was the writing on her shorts that caught our attention more. It says, “The heart wants what the heart wants.” Now that’s one statement which works perfectly with way Alia conducts her love life. She and her alleged beau Sidharth Malhotra won’t accept it in public but are seen making appearances at events like a couple. But to be fair, Alia’s heart wants to be with Sidharth and she is doing what her heart wants. She doesn’t really need to listen to anyone of course. But their regular sightings together make us scream, “make it official guys.”

Sidharth was one of the guests at Alia’s sister Shaheen Bhatt’s birthday which was an intimate gathering. He was later seen with Alia at an Ambani wedding. They came in together, posed happily for the photographers together and even left the event TOGETHER. Recently, we told you how they partied together and Alia was blushing in his company. And this shorts thus sums up everything. She does what her heart suggests. She doesn’t need to make it official. Check out the pictures here. Varun Dhawan too looked super cool. Check it out. The two of them were shooting perhaps a holi sequence because they posted a video on Twitter asking people to check out the teaser of the film tomorrow. Check out the video here